In the first semester of my masters degree, I was in a graduate-level 20th Century Music class with about thirty graduate students.  I remember the class vividly because aside from the small handful of composition majors, almost everyone – the teacher included – had a high disdain for contemporary music.  Musical examples were laughed at.  Twelve-tone analysis were glossed over because “who cares about this noise?”  John Cage’s music was passed off as ravings of a lunatic.

The suppressive atmosphere of that class was heavy on my spirit. Becoming a composition major saved my undergraduate career and reinvigorated my entire life, and that life path was being brutally stomped on by people with graduate degrees in my field.  I remember thinking to myself, “It’s hard enough to get the masses to appreciate contemporary music – these are ‘music experts’ that will have a lasting impression on their students who could subsequently have lasting impressions on their students decades later.”

The seeds planted from that class is nienteForte’s true origin story and mission statement: a concert season based on my personal belief that contemporary music of all shapes and sizes has the ability to resonate with a diverse populace and that the gap between contemporary art and its audience can be bridged with an open and inviting mind-set on both sides of the conversation. It is my sincere hope that by coming into our events as a group of disparate and diverse performers, composers, moderators, and listeners, we will all walk away at its conclusion as a more unified community that believes that contemporary music and art may have its works that we individually love and hate, but regardless it is something that belongs to all of us collectively and is therefore deserving of our acceptance, respect, and love.

MENDEL LEE (b. 1975) is a composer and musician residing in New Orleans, LA. He is currently the Founder and President of nienteForte Contemporary Music, a composer and performer with Versipel New Music, and an Assistant Director of Bands at Tulane University.

As a performer, Mendel was the snare drummer for the “Shakespeare 400” Jazz Funeral Brass Band in Stratford-upon-Avon, England. He has also performed as a pianist, percussionist, vocalist, and conductor for the Hundredth Monkey Ensemble and Versipel New Music, and he has also served as a guest performer/conductor for the West Chester University Percussion Ensemble, the Oregon Percussion Ensemble, Ensemble 504, and Ensemble Pamplemousse.

Mendel is an Innovative Percussion Educational Artist whose award-winning marching band and drumline arrangements have been performed by numerous high schools, colleges, and independent marching organizations nationwide. During his tenure with the Tulane University Marching Band, he has helped coordinate logistics for their performances in high profile national events and television coverage including the 2009 New Orleans Saints Superbowl Victory Parade, the 2010 Krewe of NFL Kickoff Parade, the 2011 Wheel of Fortune College Week, the 2013 Fox and Friends Super Bowl Week broadcast, the TUMB’s 2016 appearance in the second season of “NCIS: New Orleans”, and the TUMB’s 2018 Cure Bowl and 2020 Armed Forces Bowl performances. He also coordinated the Green Wave Brass Band’s 2016 appearance in the second season of MTV’s “Brothers Green – Eats!” and their appearance as the opening act for the 2016 and 2018 New Kids On The Block Mardi Gras World block party.

Currently Associate Professor of Composition & Theory at Tulane University, MAXWELL DULANEY received his Ph.D. in Composition & Theory from Brandeis University, where he studied with David Rakowski, Marty Boykan, Eric Chasalow, and Yu-Hui Chang. As an acoustic and electro-acoustic composer, his compositional philosophy is rooted in the study of multitudinous elements of sounds and finding new and informed ways of developing compositional structures out of them. Dr. Dulaney has been commissioned by, and collaborated closely with, soloists and ensembles including Orlando Cela, Chris Finkel, New York New Music Ensemble, the Xanthos Ensemble, and Grammy Award-winning harmonica virtuoso Howard Levy. Recent projects include a commission by ECCE Ensemble, In Ricordo di una Anima Antica for cello and clarinet in B-flat, and the commission of The Old Harp for the Ningbo University Orchestra.

Recent concerts include a performance of The Old Harp by the Randall College Orchestra in Lynchburg, VA. Future projects include a new piece for solo flute for Orlando Cela, which will be performed at DePauw University in Greencastle, IL and at Coup d’oeil Art Consortium in New Orleans, LA, and a new work for ECCE Ensemble to be performed during their 2015-16 season. Dr. Dulaney has been published in the SCI Journal of Musical Scores, Vol. 45 and his music has been recorded on Rainbow Classical label by the ensemble Mikrokosmos.

Stephen Montalvo (b. 1984) is an active composer and performer of acoustic and electronic music, as well as an audiovisual installation artist, based in New Orleans, LA. Through his music, he explores concepts related to resonance and rhythmic interplay and draws inspiration from social, ecological, and political concerns. His works have been performed throughout the United States, and internationally at the Osaka University of Arts Electronic Music Festival, by artists and ensembles including the Portland Percussion Group, Rhythm Method String Quartet, Bent Duo, Carlos Cordeiro, Talea Ensemble, Omaha Percussion Ensemble, and numerous scholastic groups. Additional collaborations include audiovisual installation projects for LUNA (Light Up NOLA Arts) Fête, hosted by the New Orleans Arts Council, as well as with the Virtual Krewe of Vaporwave.

Stephen holds a Master of Arts in Music Composition from Tulane University where he studied with Maxwell Dulaney and Rick Snow and a Bachelor of Music from West Texas A&M University, where he studied percussion with Susan Martin Tariq and composition with Joseph Nelson and Robert Denham. Current affiliations include the Society of Composers and the Vic Firth Education Team as a Scholastic Educator and Marching Percussion Specialist.

What better way to lead up our upcoming season 13 than to remember our season 12's greatest moments! We had the honor of having @swollschleger fly to NOLA for the performance of his work "Between Breath" by The Lang/Rainwater Project! Watch it here: https://t.co/IoUPrJVlih
h J R

nF is honored to be a @NewMusicUSA Organizational Development Fund awardee for our upcoming season! We have some great events cooking that would not be possible without this support. Thanks New Music USA, and kudos to all of the grantees! https://t.co/N0z1YJYxE8 #WeAreNewMusic https://t.co/EY0C9vRsn9 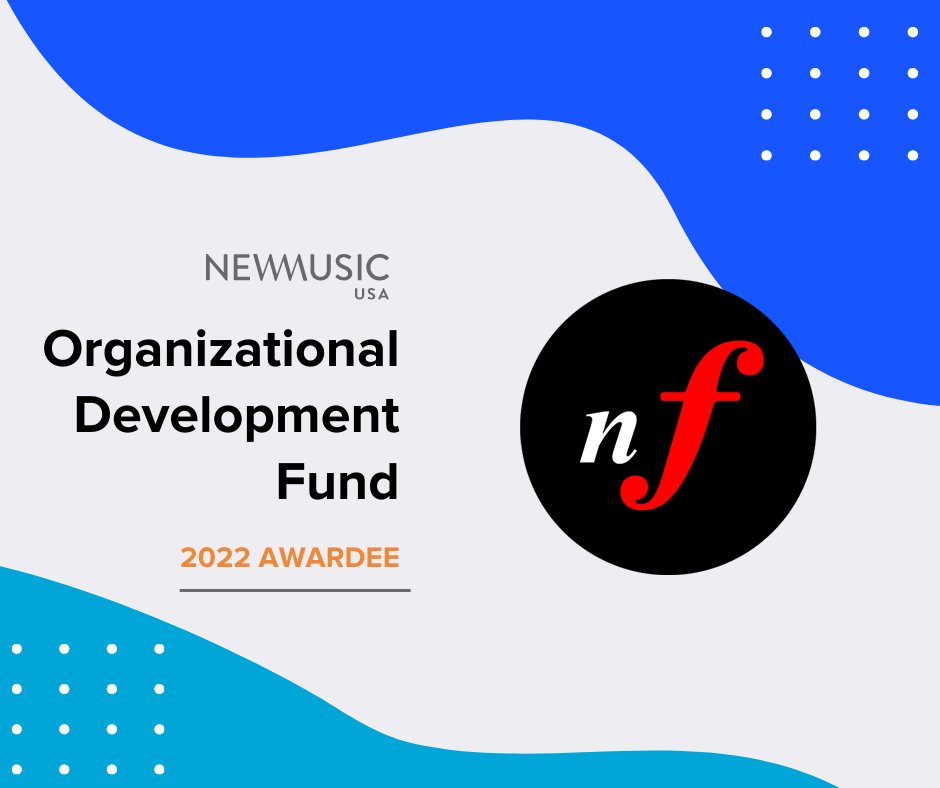 Last night, we ended our season with flutist Ji Weon Ryu (and special guest Daniel Parrette) at the @HotelPeter_Paul. Thanks as always to the entire nF community - these residencies would not be successful without your belief in our mission. YouTube content coming soon! https://t.co/r0O2ozsmVF 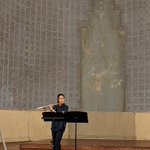 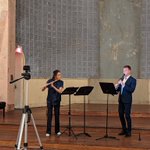 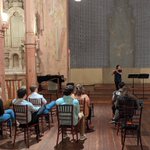 Our season finale is tomorrow! Join us at the @HotelPeter_Paul for a new music concert featuring the amazing flutist Ji Weon Ryu! https://t.co/O8TxHjXSJa 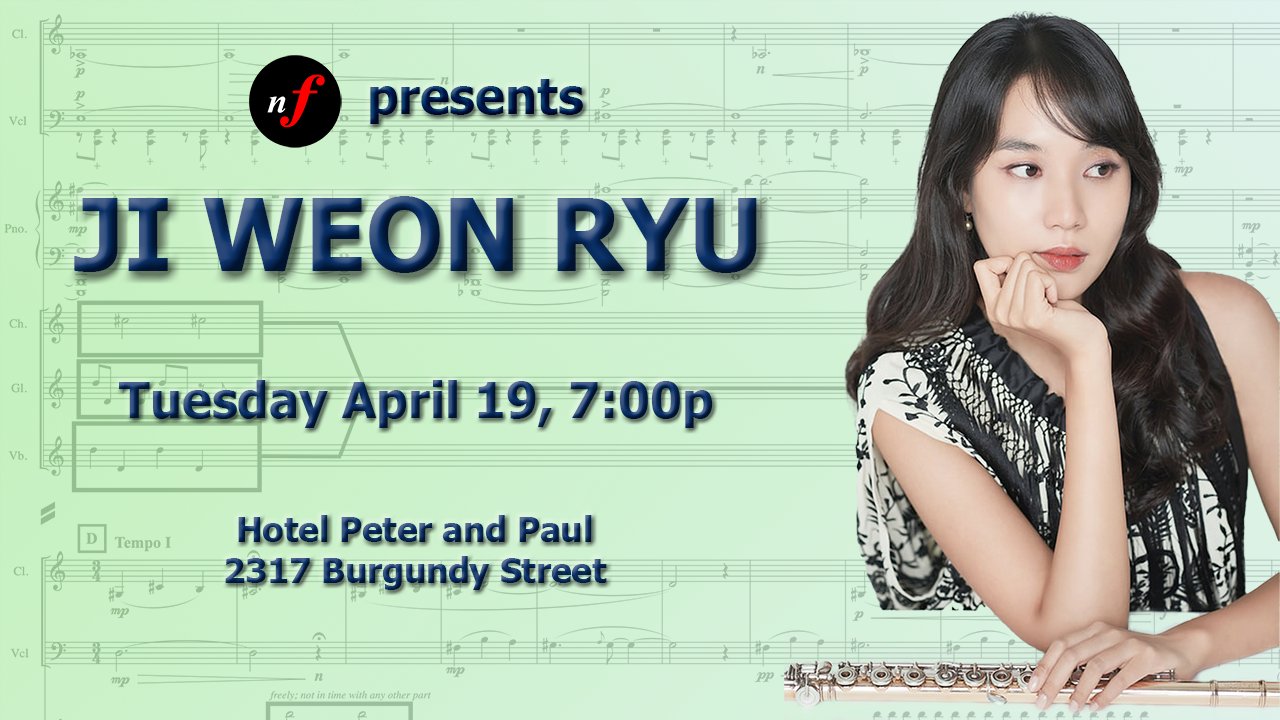