Identity has always been something that I’ve treated as malleable in my personal and professional life. It’s one of the reasons I decided to become a composer. Part of this comes from having a highly diverse set of friends and loved ones, all of whose opinions I hold dear even if they drastically contrast my own. Another part of this stems from my commitment to the fight against stagnation and entropy – I constantly try to challenge who I am as a person and as a brand, and I take steps to deliberately ensure that I am never entirely comfortable with my routine or my life.

Practically all of the clocks in my house are set to different times. It’s serves as a background reminder that constants should never truly be considered constants.

The shape and identity of nienteForte has, perhaps unsurprisingly, undergone a similar malleable state of growth over the years – what started as a single Tulane University concert of mostly student musicians in 2011 eventually became a week-long festival of concerts between Tulane University and the University of New Orleans, featuring professional contemporary musicians and composers from across the globe. And while nienteForte had hit a steady and consistent stride, when it came time to reflect on our 2018 Festival, my co-director Max and I decided that we wanted to attempt to better serve our audience, musicians, and the music that we’re so passionate about, and thus wanted to give nienteForte a fresh approach.

As a result, I’m excited to announce that nienteForte Contemporary Music has pivoted away from a condensed week-long festival of concerts and is now embarking on a full concert season for the 2018/2019 academic year and beyond, featuring a wide array of amazing contemporary music performers and composers peppered throughout the year. Our debut season is packed, featuring concerts from Bent Duo, Ogni Suono, Andy Kozar, Promenade Sauvage, and more.

We can’t wait to share this next chapter with our audience and our community, and hope that you can join us as we explore this new journey and identity. Be sure to check out our schedule of events for the 2018/2019 season, and come celebrate the joys of contemporary music with us – an amazing form of art that relishes in its lack of definition, and is ever changing and evolving in the same way that we do.

nienteForte is proud to be fiscally sponsored by the National Performance Network (NPN).

NPN is an outstanding organization whose mission is to help increase the arts into the public experience. Particularly as nienteForte is a two-person passion project, NPN has been instrumental in handling our fiscal overhead.

If you are interested in making a tax-deductible one-time or recurring donation to nienteForte, you can go to their donation site and designate that your donation go towards nienteForte. You can also opt to mail in a check to the National Performance Network with “nienteForte” in the check memo and send it to:

Many thanks to Steffani Clemons and Stephanie Atkins for their hard work in making this sponsorship possible!

April 3-4: Open Rehearsal and Concert at the University of New Orleans

Using a decidedly contemporary language of diverse harmonic color, inventive timbre and ingenious effects, award-winning composer Yu-Hui Chang has written a wide range of music that compels and resonates with professional musicians and audiences alike. She is the recipient of fellowships from the Guggenheim Foundation, the American Academy of Arts and Letters, Radcliffe Institute at Harvard University, and commissions from the Fromm Music Foundation, Koussevitzky Music Foundation, Barlow Endowment for Music Composition, and Meet The Composer (now New Music USA). Additional honors include the Aaron Copland Award, Yoshiro Irino Memorial Prize from the Asian Composers’ League, and the Council for Cultural Affairs of the Executive Yuan (Taiwanese government agency, now Ministry of Culture.)

A native of Taiwan, Yu-Hui began her intensive music training in piano, voice, and music theory at the age of six, and started seriously pursuing composition as a career at the age of fourteen. After graduating from the National Taiwan Normal University, she came to the United States in 1994 and received her graduate degrees from Brandeis University (Ph.D.) and Boston University (MM). Now an Associate Professor at Brandeis University, Yu-Hui taught at the University of California-Davis between 1999-2006. As a dedicated promoter of contemporary music, Yu-Hui co-directed the Empyrean Ensemble, the ensemble-in-residence at UC Davis, between 2000-2006. In 2009 she was appointed Co-Artistic Director of Dinosaur Annex Music Ensemble, a leading exponent of contemporary music performance since 1975. Collectively she has curated more than seventy concerts.

In the summer of 2011, Yu-Hui was invited to be the Guest Composer at the Wellesley Composers Conference. She has also been featured in the Asian Music Festival in Tokyo, the Asian Contemporary Music Festival in Seoul, the Pacific Rim Music Festival at UC Santa Cruz, and the Festival of New American Music at California State University – Sacramento. In March 2006, Works and Process at the New York Guggenheim Museum presented three of her works, highlighting Yu-Hui as a new talent of the younger generation.

The series began as one piece for solo voice, which she began performing as a graduate student, and has grown to over 25 works for orchestra, opera, vocal ensemble, large chamber ensemble and string quartet, which have been performed internationally with some of the top ensembles for new music. Her works are taught in the composition and musicology programs of many leading universities such as MIT, University of Pennsylvania, Smith College, and Mills College, and she has lectured at Harvard, UC Berkeley, Dartmouth and Wellesley. Ms. Gee’s career began with commissions for her own voice as a soloist or in combination with other instruments, but now regularly includes requests from singers wishing to perform her works, or commissions from ensembles and vocalists who would like to interpret a newMouthpiece in the series.

Her debut portrait CD, Mouthpieces was released in January 2014 on the col legno label in Vienna and received a warm and thoughtful review in Gramophone, the premier review magazine for classical music. The review stated, “Erin Gee clearly has a contribution to make,” and mentioned the “tangible virtuosity of Gee’s formidable vocal execution, as well as the comparable (if relatively more orthodox) finesse of the instrumental component.”

Gee’s awards for composition include a Guggenheim Fellowship, a Radcliffe Fellowship, the 2008 Rome Prize, Zürich Opera House’s Teatro Minimo, and the Picasso-Mirò Medal among others. She has been commissioned by the Zurich Opera House for the opera SLEEP, by the Radio Symphony Orchestra Vienna, the Los Angeles Philharmonic New Music Group under Esa-Pekka Salonen, and for four pieces by Klangforum Wien. Gee has also worked with the Latvian Radio Chamber Choir, Ensemble Surplus, Alter Ego, Either/Or Ensemble, Wet Ink, Metropolis Ensemble, Repertorio Zero, and many others. The American Composers Orchestra commissioned Mouthpiece XIII: Mathilde of Loci Part I for Zankel Hall in Carnegie Hall, which was highlighted in Symphony Magazine (March/April 2010), and cited in the New York Times as “subtle and inventive.”

She has had performances in Europe, North America, South America, Hong Kong and Japan and in the Wittener Tage für Neue Musik, Musik Protokoll in Steirischer Herbst, Klangspuren, Darmstadt Festival Summer Courses, the Sonic Festival, and the Zurich Tage der Neue Musik among others. Gee was in residence at the Montalvo Arts Center and the Akademie Schloss Solitude in Stuttgart in 2010. She is active as a vocal performer of her own work, but it is not designed exclusively for her voice.

Ms. Gee is currently an Assistant Professor of Composition at the University of Illinois, Urbana- Champaign. Her chapter titled “The Notation and Use of the Voice in Non-semantic Contexts: Phonetic Organization in the Vocal Music of Dieter Schnebel, George Aperghis and Brian Ferneyhough” is published by Routledge Press in the book Vocal Music and Contemporary Identities, edited by Christian Utz and Frederick Lau.

Through her Mouthpiece series she has created an ephemeral world that expands the possibilities of the voice, leaves behind the constrictive structure of language, and replaces histrionic female vocals with a virtuosic mouth and a tabula rasa for an emotional palate. Composer, Professor and former Arts Director for the American Academy in Rome Martin Brody’s states in his CD liner notes, “Erin Gee presents a set of voluptuous enigmas – a taxonomy of finely-etched utterances devoid of meaning; an orderly syntax of sounds that vaporizes fixed forms; an aesthetic environment that feels at once extraterrestrial and uncannily familiar.”

When I first started nienteForte as a single concert in 2011, the primary objective I had in my head was simply to inspire. I wanted to give my students and the Tulane community an avenue in which they could be exposed to and potentially be inspired by contemporary music in the same way that I was during my formative undergraduate years. It only took a single concert with a wide variety of contemporary repertoire to change my entire career and life path that now two decades later continues to shape how I compose, teach, and live my life.

Four years later, nienteForte has exploded into something that I never would have anticipated, particularly with the newfound partnership with co-director Maxwell Dulaney. Both of us come from vastly contrasting backgrounds and philosophies when it comes to our own music, but what makes our co- directorship in nienteForte so exciting to me is that his vision and hope to inspire is just as strong. By combining our resources in nF, we’re able to further realize that vision to create a spark of excitement and wonder about music of all shapes and sizes that can have life-changing impact and connections to our audience whether enthusiast, performer, or composer.

The inclusion of Ensemble Pamplemousse in nienteForte’s debut year as a festival is particularly exciting and has a significant parallel with this mission. Not only is Pamplemousse comprised of musicians and composers from a wide spectrum of experiences and perspectives brought together by a common vision, but their collective members act as a significant role- model for women composers – a segment of the music world that is severely underpopulated. In this regard I feel that Pamplemousse as a successful and highly experimental professional ensemble represents a hugely relevant principle in today’s modern society: in music, and subsequently in any form of art, everyone – especially women – should feel free to be exactly who they want to be.

From a humble concert to a full-fledged festival, read about nF’s history.

@bdw0lf closed out his nF concert with a world premiere by nF's very own @emdiidme Many thanks to Carlos and all of our composers (Max, @Biroc1, Carli Knight, and Ângela da Ponte) for an outstanding evening of new music! S11 finale details soon! https://t.co/m70AftVkrf
h J R

@bdw0lf's third piece on our nF Virtual concert featured Carli Knight's "Distending". Congratulations to Carli and thanks to Carlos for your outstanding performance and video work! https://t.co/b8vNZ1v6Ip
h J R

Last week, clarinetist @bdw0lf delivered some outstanding performances starting with @Biroc1's "Ungrund (After Böhme) II". Thanks so much to Mic for creating this wonderful work! https://t.co/ISPgSLXf8m
h J R

Our thanks to @bdw0lf , our contributing composers @emdiidme, @Biroc1, Carli Knight, and Ângela Da Ponte, and our wonderful nF Community for an evening of outstanding #NewMusic! Look for individual video releases next week on our YT. S11 Finale details soon! https://t.co/DKFNcMQ4zx 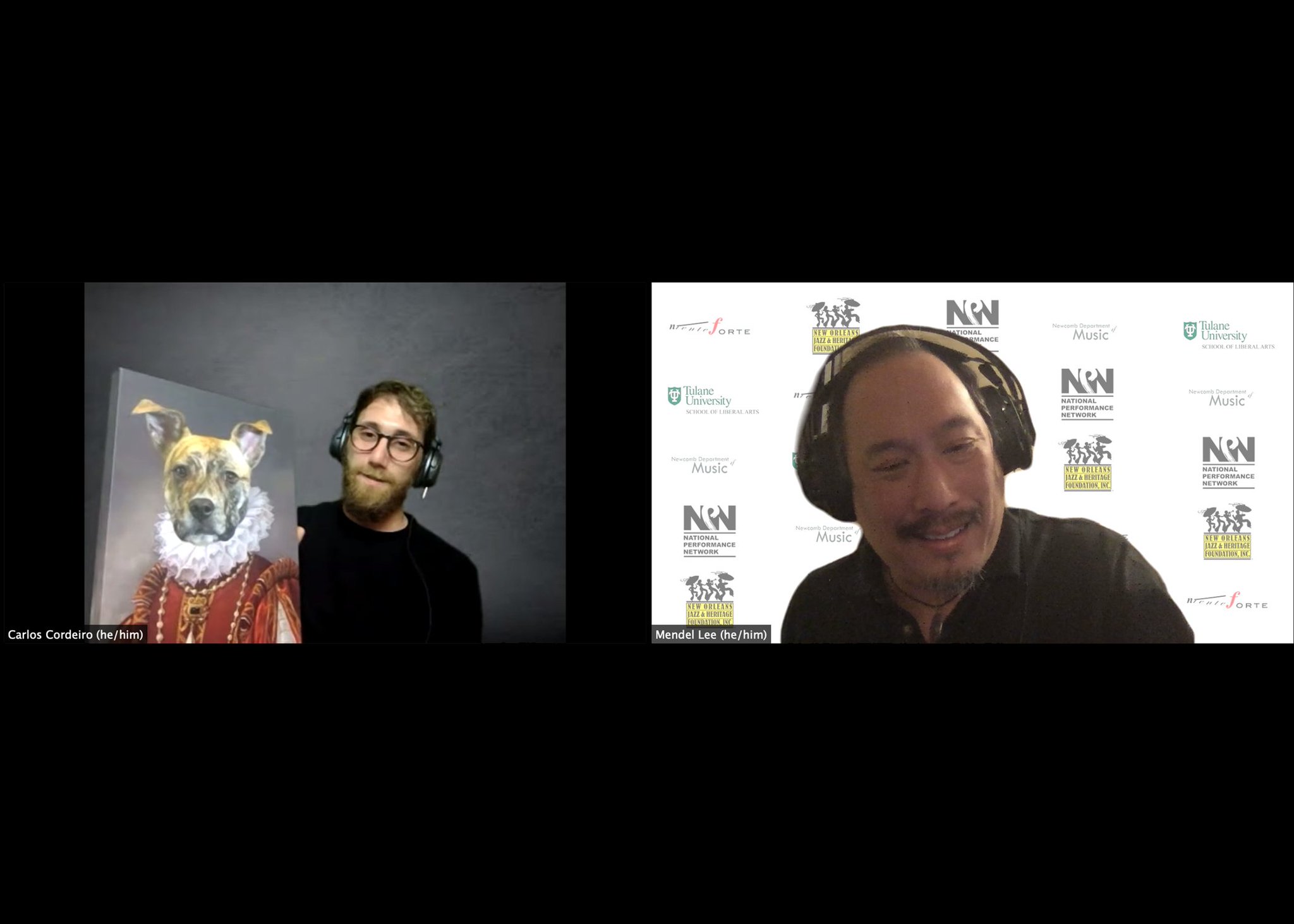